And we meet again!…  Just in a new year!  Wow!  Just thinking of all the newsletters I’ve written since starting my job at the park in 2010 and its been well over 100!  Just think of all the visitor experiences, new life and changing landscape that each season brings, and the amazing memories that we’ve documented and discussed that are within each of these newsletters.  And the best part…  there’s still more to come!  We’re still climbing to the top of Haynes Ridge so to speak, but we’re definitely better with each step!  With this new year, I hope you will continue to support Caprock Canyons State Park and embrace the ebb and flow of all things that make up the Caprock experience!

Some things continue to remain the same throughout the years here at Caprock and our annual trout stocking is no exception.  On December 9th, the Texas Parks and Wildlife emblem proudly glistened in the sun on the fisheries trailer as it released its load of over a thousand rainbow trout into Lake Theo.  And I’m sure there were many happy grins on the faces of a quite a few folks too!

Drawn hunters for the aoudad and the youth deer hunt were a success with one individual harvesting one of the largest aoudad ever documented here in the park.  The horn length on the aoudad ram measured 29 5/8 inches!

The Christmas bird count conducted by the Texas Panhandle Audubon society was a great success and had its own set of surprises.  This year, birders got some white-throated swifts in their sights which is not a common occurrence here at Caprock.  Generally speaking, these birds usually winter only in far west Texas this time of the year.  This is only approximately the 2nd documented time this specie of bird has been observed in the park though they have been observed in a few other areas in the Texas Panhandle.  There may be a higher incidence of these birds wintering in the Texas Panhandle but sightings of them here will more than likely continue to raise a few eyebrows from birders until more observations are documented.

Winter officially began on December 21st so it came as no surprise that some wintery weather threatened to set in for a spell on New Year’s eve.  The park saw a dusting of snow from the event but the majority of the snowfall went southeast allowing for some cold but still doable conditions for intrepid hikers on the first day of the new year.

What to See & Do This Month:  Taste the Rainbow!

I know, I know…  I always use that play on words to describe the experience that can be had when the trout are stocked.  But the truth is that there’s plenty of opportunity right now for you to capitalize on the fishing in Lake Theo.  Especially when rainbow trout are involved!  The trout will be around as long as cooler weather temperatures last.  Don’t miss out on your chance to taste the rainbow!  There’s a limit of 5 trout per individual.  So how do you like your rainbow? 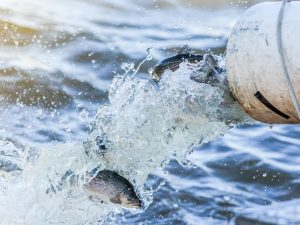 Here’s what we’ve learned over the years.  The rainbow trout love salmon eggs and “powerbait”.  Nuff said right?  Well… not quite.  Rainbow trout love cold water so this time of the year, most often the trout are very active closer toward the water surface.  In cooler weather months, you can generally have good success by simply fishing with a regular rod and reel by suspending the bait under a small bobber approximately 1.5-3.0 feet above the hook.  However, if the weather has been more mild and you’re not having much luck, try fishing closer to the bottom.  In this case, throw your bobber back in the tackle box and opt for a lead weight placed about 1.5 feet above the hook.  This will allow your bait to stay suspended a little over 1 foot from the bottom of the lake where water temperatures are cooler and will ring the dinner bell for those lazy “bottom feeders”!

Pic of the Month:

Instead of choosing just one picture to round out this month, we thought it best to give everyone a peak at some of our most favorite pictures throughout the years that we believe embodies the true essence of the “Caprock Experience”.  Check it out on our social media accounts (Facebook & Instagram) under “Caprock Canyons State Park Photo Compilation Video”.

“There will come a time when you believe everything is finished.  That will be the beginning.  ~Louis L’Amour

Aren’t you glad that there are always new beginnings?  Regardless of what month it is in our calendar year, in reality, each new day is a new beginning.  So if you’re like me and it’s past the first day of the new year and already you’ve had a few too many hiccups in your newfound resolutions, take comfort in knowing that every passing day is not an end, it’s a beginning.  You can begin again.  And again if that’s what it takes.  Isn’t that just what nature does?  When I thought back on the newsletters I’ve written throughout the years, there are definitely some common themes and repeating events.  But then it occurred to me that even though nature has repeating seasons and cycles, something “new” is always happening.  Another bison calf is born in the Spring, and although the very same event happened last year, it’s “new” because it’s a new addition to something much bigger than itself.  It’s also a new experience another visitor has in seeing it.  It’s a new beginning.  What about that sunset you saw the other day?  Have you ever seen another one just like it?  Every day the sun sets in the west but I’m betting that conditions have never again been exactly the same to cause the exact same sunset view.  In the past, people may have thought that the day of the bison was finished with the booming of that last rifle shot.  But, then a handful of people like Mary Ann Goodnight came along and gave them a new beginning.  And it’s truly been an awesome one!  The more and more that I learn out here from nature at Caprock the more and more I’m realizing that I’m not the teacher, I’m the student!  I wonder what new beginnings await us in 2021!?