This past month threw us for a loop with many surprises.  Lots and lots of visitation, one incredible observation, and an ice storm just to name a few….

The month of October is one month in particular that we at Caprock Canyons take the time to appreciate our many resources.  October was Archeology Awareness Month and we are certainly appreciative of the archeological and cultural history that speaks volumes in Caprock Canyons State Park.  In fact, there’s over 10,000 years of it and of course, if it weren’t for the scientific processes inherent in archeology, we certainly wouldn’t know much about the people who lived here, let alone be able to give them a voice.  If you haven’t already, check out the historical marker for the park’s Lake Theo Folsom Bison Kill site located on the southwest side of Lake Theo.  Incredibly, this site reveals the ever present relationship between bison and man spanning over 10,000 years, right here in Caprock Canyons State Park!

Also in October was “Bat Appreciation Month”.  Earlier in the year, we knew that it may be more difficult for visitors to view the bat emergence flights from Clarity Tunnel without the “Bat Tours”, so we took some time to video it for online viewing.  We also wanted to ensure that the bats received their due credit so we made sure to dispel some of those long-held myths surrounding this beautiful creature of the night.  If you’ve ever wanted to view the bat emergence flight or simply want to know more about bats in Texas, check out our online interpretive video.  Caprock Canyons also has a variety of interpretive programming located on the Texas Parks and Wildlife Education YouTube channel!  It also has some good content for students so be sure and share it with others!

Last month, we were made aware of a very important observation.  An Ottoe skipper butterfly was observed and identified on iNaturalist here in the park by park supporter Catherine Galley.  What’s so awesome about that?  Well, the Ottoe skipper has only been observed and identified a handful of times throughout Texas.  Here in the Texas Panhandle, we are right on the southernmost edge of its range.  This beautiful butterfly has had a hard road too.  It is considered a species that is vulnerable due to its loss of prairie habitat.  We considered this observation as good news and that perhaps our prairie restoration efforts are paying off not only for larger prairie fauna like the bison and prairie dogs, but also for some of the prairie pollinators and plants as well.  We’re happy to host such a magnificent specimen as the Ottoe skipper in the prairie at Caprock Canyons and we sincerely hope that it will visit again with friends!  Thanks Catherine for such an awesome observation! 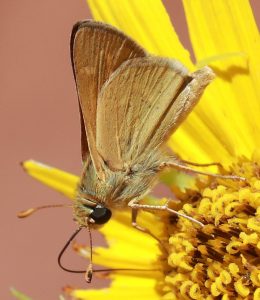 And then…  well, let’s just say there was ice.  Lots and lots of it.  A winter storm blew in on October 26th and told us the where to and what for.  Literally.  We all came to work the morning of the 26th and then shortly thereafter, we were told to “go home” and to “not pass go” by the winter storm.  What would occur later, none of us were completely prepared for.  The precipitation from the storm combined with the below freezing temperatures created a thick layer of ice on everything.  The park and many of the surrounding areas completely lost power and all around were electric poles that had fallen to the ground from the weight of the ice.  In fact, the park and many others around us were without power for almost 2 full days and some were still without power after 3 days.  There was no power, no phones (cell phone and land line), and no water in the park.  Thankfully, we have such great park supporters and visitors who were very understanding and patient with us.  Lots of damage occurred as a result of the storm.  There were many broken tree limbs in the park and we are still in the clean up process.  As I type this, there are still many linemen at work diligently repairing broken power lines from the storm.  Linemen, we appreciate you more than you know!  Thank you for getting us back up and fully operational!

Here’s a look at some of the ice during the winter storm here at the park.  (It literally looks like snow, but it was all ice): 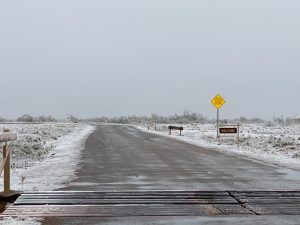 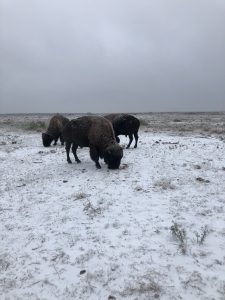 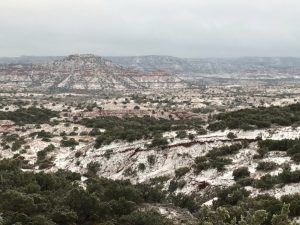 What to See & Do this Month:  Check out Winter Waterfowl

During the winter months, Lake Theo and Dry Creek Lake have a variety of waterfowl to view!  See how many different species you can identify!

Thanksgiving is drawing near and we’ve noticed throughout the years that many families enjoy getting together at the park, spending time in nature, and cooking their Thanksgiving meal outdoors!  CCSP is currently under a burn ban, but you can use charcoal in a containerized receptacle up off of the ground! (No ground fires)  Get creative with your outdoor chef and cook up some fun grub for this Thanksgiving!

Being without electricity while living in an all electric home during the winter storm made me realize just how dependent I am upon electricity.  Not to mention my cell phone!  My house was cold and I constantly felt out of my element.  My habitat, so to speak, was turned upside down and I was finding it very difficult to adapt to my changing environment.  Then it made me realize just how hard it is for many different species to adapt when their habitat is changing or even diminishing.  Many species of bats, for example, have been labled as threatened or even endangered due to habitat loss.  Many of these bat species are so dependent upon their current habitat that they cannot as easily adapt to a changing one.  Bats that depend only on trees for their roost, for example, have a very difficult time.  However, some bats like the Mexican free-tailed bat, can easily adapt and have shown us just how great their potential is by congregating underneath man-made structures like bridges for example.  Another example can be seen in the prairie.  The prairie environment is one of nature’s habitats that is vastly diminishing in many parts of the country.  In fact, many of our prairies in Texas are fragmented and now make up only approximately 1% of its historic range.  Yet, there are some species that with a little help, have begun to overcome and are now thriving despite their current habitat circumstances.  The Black-footed ferret, whose diet almost completely depends upon the prairie dog, was once considered completely extinct.  Now, populations of this ferret have began a come back though there is still much work left to be done.  The American bison is considered one of our greatest conservation success stories.  Until we can find a way to completely adapt without electricity in today’s time, we need help.  The same can be said for many of nature’s species.  We don’t have to be a lineman who can ultimately turn the power back on or even a wildlife biologist with specific knowledge and hands on experience.  Trust me, I know plenty of people who helped others weather this past winter storm by just offering a warm place by the fire or a hot meal.

Wishing you a blessed Thanksgiving!